The fourth, record edition of the Open Eyes Economy Summit in Krakow

3000 participants and 200 speakers coming from 6 continents have met in Krakow! The Open Eyes Economy Summit 2019 – an international congress of the economy of values – has come to an end, leaving behind not only important answers to puzzling questions but, first of all, the idealists who wish to change the world for the better. 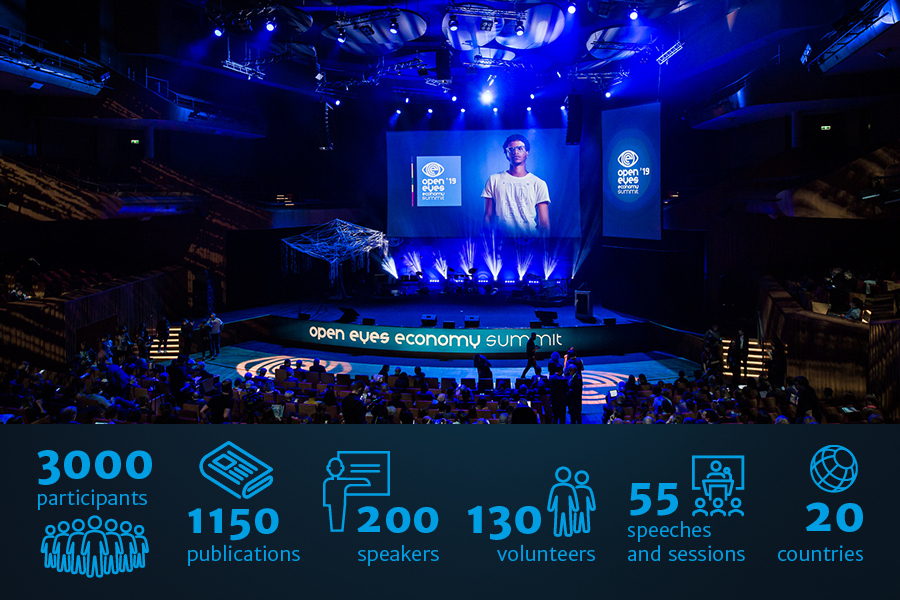 Two days filled with constructive discussions, exchange of thoughts, experiences and inspiring meetings with people who are open to dialogue and to one another. In the ICE Krakow Congress Centre, recognised specialists from various areas discussed issues bothering modern societies such as climate change, overtourism, technology, textile industry responsibility, labour market and social values. The discussions were divided into four thematic blocks: COMPANY-IDEA, BRAND-CULTURE, CITY-IDEA and INTERNATIONAL GOVERNANCE.

– I want to make a sentence that has been reminded by Archbishop Grzegorz Ryś, and whose author is Fr. Józef Tischner, a message – “Solidarity is possible only among the people of conscience.” It is an insight into the problem of the importance of values in a different context than the one we usually discuss. We discuss something that is more collective as it is related to business activities. Here, we have a reference to a person, in a more individual and personal sense. It seems to me, though, that it needs to be considered together, i.e. to show that we need the solidarity in the development for the economy of values. However, if this solidarity is to become a fact, it is possible only among the people of conscience. Among the people who consider the ethical dimension of their activities as important as anything else. – said Professor Jerzy Hausner, the Chairman of the OEES Program Council, about the economy of values.

The celebrated opening of the congress was accompanied by a passionate speech by Alberto Acosta – the former Minister of Power and Mining in Ecuador – who, due to his activities for the benefit of the Yasuní National Park, has become a symbol of the fight for nature, not only in his country but also all over the world. In his opening speech, he drew attention to the responsibility for the common good and called for the opening of the eyes and hearts. During the opening session there were also speeches by Nancy Githaiga from WWF Kenya and Professor Andreas Novy from the University of Economics in Vienna. David Throsby also appeared on the scene, asking deceitfully whether the economics is still able to tell us something useful.

The further sessions: The values and their linguistic representations in public persuasion by Professor Jerzy Bralczyk, Is greed good? by Szymon Hołownia and The three voices on the Tri-City with the participation of the Mayors of Sopot, Gdynia and Gdansk, moderated by Mateusz Zmyślony, turned out to be highly popular. During the congress there were also confrontations, held in so-called battle points, where fierce discussion were attended by, among others, Aleksander Smolar, Ludwik Dorn, Bartłomiej Sienkiewicz, Krzysztof Łapiński, Fr. Adam Boniecki and Professor Magdalena Środa.

During this year’s OEES edition, the hosts presented subsequent publications of the OEES publishing – The Open Eyes Book 4 and The Open Eyes Magazine 4. Additionally, each participant received “An Idealist’s Set” which included a certified T-shirt with an “IDEAlist” print, a Fairtrade cotton tote and a water bottle manufactured on the basis of sugar cane.

The Open Eyes Economy Summit is a huge “vortex” – as one of our participants called it. A vortex that draws you in, involves and actually changes. Thousands of thoughtful people from all the kinds of possible environments, industries and disciplines mix here in a fascinating way – concluded Mateusz Zmyślony, the Creative Director of the OEES.

Apart from the summit itself, the Open Eyes Festival, i.e. artistic projects organised around the congress, is held every year. Within this year’s edition the events included, among others, an exhibition entitled “Wiesław Dymny – I am a wounded man. A writer, an actor, a painter”, a spectacle entitled “Dymny” and directed by Krzysztof Materna, a session entitled “The artist changes the world – Maurycy Gomulicki” which was accompanied by the presentation of the artist’s works, an exhibition “Space for Art” by Ryszard Otręba and a screening of “The Calamity of Abundance” movie accompanied by a meeting with Ewa Ewart and Alberto Acosta.

The host of the fourth edition of OEES is the City of Krakow, and the Main Partner – The Malopolskie Voivodeship. The main media patrons of the event include Dziennik Gazeta Prawna, Interia.pl and RMF FM.