The Open Eyes Economy Summit 2021 – International Congress of the Economy of Values, held last autumn in Krakow, was recognised as one of the best events in the Central European region in the Conventa Best Event Award. 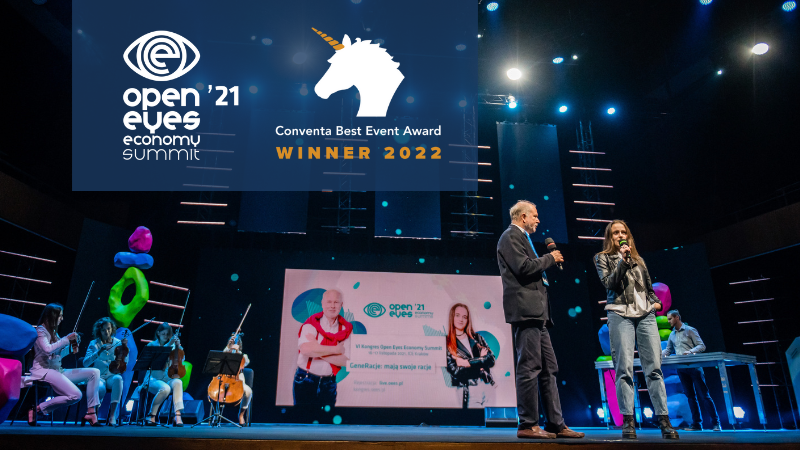 Best B2B/B2C event and Audience Award The Open Eyes Economy Summit Congress was awarded in as many as two categories: Crossover Event, the title of the best event for both B2B and B2C public, and the Audience Award. The competition results were announced on 26 September 2022 at the final gala in Ljubljana, the capital of Slovenia. The OEES Congress competed in the final against 27 events from Croatia, Italy, Sweden, Slovakia, Slovenia, Hungary and Serbia. The international jury and the audience appreciated the freshness, innovation, interdisciplinarity and accessibility of the OEES sixth edition, as well as the campaign&#39; GeneRations have their reasons&#39;, which promotes intergenerational social dialogue and the involvement of many institutions representing different backgrounds in the creation of a congress on economic issues. Artists from the Academy of Fine Arts designed the scenography and animations, professional musicians composed the musical theme, and a string quartet and a DJ performed on one stage during the official opening. &quot;These are just a few examples of how we show that the economy should be combined with social values. Many thanks to all those involved in the creation of OEES&#39;21. This award is our joint success. We are not slowing down, as we are looking forward to the next edition this November, where we will focus on credibility&quot;, says Kinga Taćkiewicz, OEES Managing Director. During the two days of last year&#39;s Congress, there were as many as 250 speakers on 7 stages in the ICE Krakow Congress Centre and over 5,000 participants (onsite and online). International Krakow highlight Open Eyes Economy Summit has been strengthening its position as a flagship socio- economic event and thus a Krakow international highlight from year to year. The previous OEES fifth edition, which also took place online for the first time due to the pandemic, was also recognised in the Conventa Best Event Award. The event then won the first Audience Award and second place in the Digital Events category, becoming one of the best hybrid events and the best congress in Central Europe in 2020. Open Eyes Economy Summit The OEES is an annual summary of the activities of the socio-economic movement initiated in 2015 by Professor Jerzy Hausner and Mateusz Zmyślony. It is an interdisciplinary meeting of people thinking responsibly about the socio-economic development of our civilisation, open to participants regardless of their age, social, economic or political status. This is an excellent opportunity to listen to extraordinary personalities live and make new contacts.

The organiser of the Open Eyes Economy Summit is the Foundation of Public Economy and Administration (GAP Foundation), whose mission is to develop the economy of value and to disseminate its solutions in public action and debate. An integral part of the Foundation&#39;s activities is also the generation and dissemination of expertise within the OEES HUB think tank, a form of interaction between science, business and culture. The materials available on the think tank&#39;s portals and the publications of the GAP Foundation are a valuable source of knowledge for practitioners looking for up-to-date analyses, experts wishing to broaden their knowledge, and anyone interested in the issues addressed by the Open Eyes Economy.