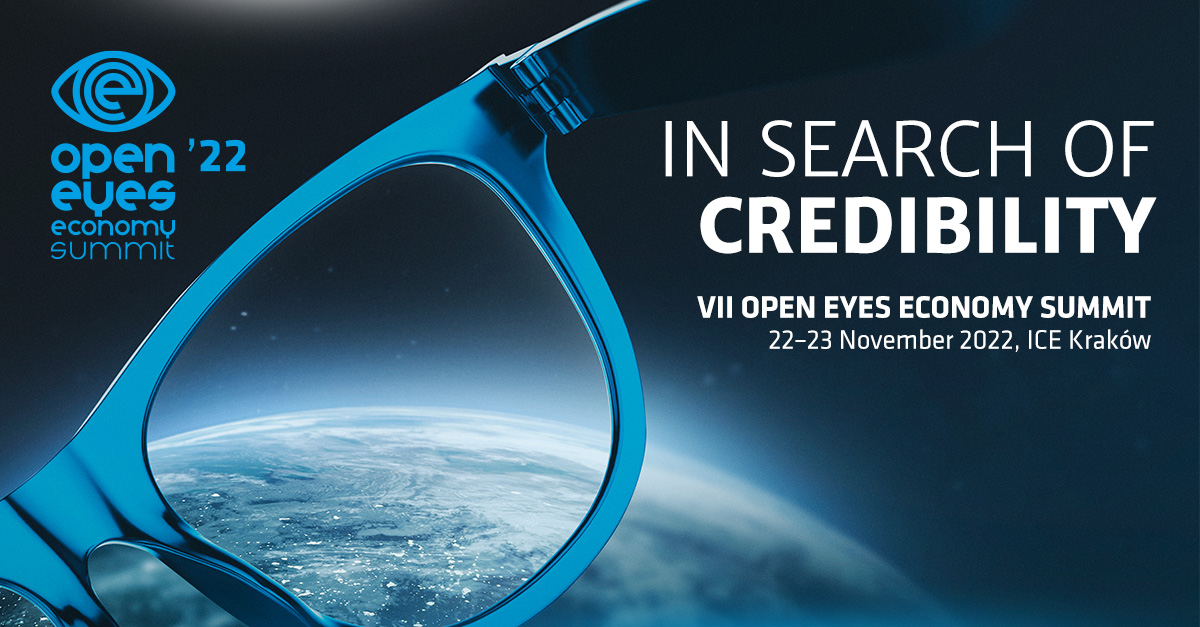 The 7th Open Eyes Economy Summit Congress will take place on 22 and 23 November 2022 at ICE Krakow. Thanks to the hybrid format, the event will be held both on-site and online. The theme of this year’s edition will be credibility and its reflection in socio-economic and political life. The Congress will include a presentation of the conclusions of Poland’s Economic Credibility Index report, which is currently under development.

In search of credibility

The economic credibility of the state, as well as of institutions and companies, will receive the most attention at OEES 2022. The starting point for a multi-faceted discussion on this topic will be the conclusions of the currently prepared report, Poland’s Economic Credibility Index. The authors draw attention to several unfavourable phenomena in the Polish economy, which have recently influenced an apparent decrease in the indicators of our country’s economic credibility. The economic credibility of the state affects the conditions and costs of the economy. It is a kind of public good that needs to be sustained and not destroyed. When public power loses economic credibility, it turns to propaganda and bribing groups important to political interests. Among other things, this leads to a reduction in confidence in domestic money and inflation, points out the coordinator of the group working on the Index, prof. Jerzy Hausner, Chairman of the Open Eyes Economy Summit Programme Council, GAP Foundation.

Among the thematic tracks of the COMPANY-IDEA, CITY-IDEA, and BRAND-CULTURE blocks will be: human rights in business, in the context of the needs of workers as highlighted by the COVID-19 pandemic; the social and institutional dimensions of urban regeneration in the face of climate challenges; cities adapted to the needs of the younger generation; design-thinking and ‘co-creation’ in the creation of public services and empathetic organisations; the Green Deal and aspects of its financing, and the conflicts that are growing around it.

When discussing the current problems of the modern world, it is impossible to ignore the topic of the ongoing war in Ukraine. The special track “Open Eyes to Ukraine” will be devoted to the most critical economic, social, political and cultural issues, the directions of cooperation development between Poland and Ukraine, and the Ukrainian people’s current and future needs.

Interested parties can participate in the event on-site at the ICE Krakow Congress Centre and via the virtual Live OEES streaming platform (live.oees.pl). Registration takes place at www.live.OEES.pl/bilety2022.

Previous pandemic editions have taught us humility. But not only that – they also taught us exemplary organisation and the ability to respond to different scenarios. The Congress will always be held in a hybrid format, but this year we want 3,500 participants to meet at the ICE Congress Centre in Krakow again, as before the pandemic. That is why ticket sales for OEES will start as early as 8 June and take place in 3 stages: “Early bird tickets at the lowest price will be available until 21 August”, points out Open Eyes Economy CEO Tomasz Wojtas.

The Congress will also traditionally be accompanied by the events of the Open Eyes Art Festival, which help to understand the role of art in creating the reality around us. The Open Café initiative, on the other hand, is a space where Congress guests can taste exceptional delicacies, mostly local but sometimes also from different parts of the world, always created with respect for nature and man, produced responsibly and in an ecological manner. In previous editions, these included coffee, apples and honey, while this year’s Open Cafe theme will be symbolic bread and cereal. Global economists estimate that due to global events such as the Russian invasion of Ukraine and droughts in France, the world is at risk of losing nearly 35 per cent of its cereals. This sizeable deficit will only exacerbate the problem of hunger and lack of access to food.

Many companies, institutions and organisations are keen to get involved in the event. The partners of the 7th edition have already included the AGH University of Science and Technology in Kraków, the Warsaw School of Economics, the University of Economics in Kraków, ING Bank Śląski, InPost, VELUX, Stellantis and LuxMed. The Host City is the City of Krakow. More information about the upcoming OEES is available at www.kongres.oees.pl.

The Open Eyes Economy Summit (OEES) is the International Congress on the Economy of Values. Since 2016, with the help of prominent figures from the worlds of science, economics and culture, it has proved that business and the economy should be based on social values.

With its interdisciplinary programme, well-known authorities from economic and social life, and a lively formula confronting different points of view, the OEES strengthens its position as a unique event from year to year. This is confirmed by the success of the Congress in event industry competitions in the country (MP Power Awards) and Europe (Conventa Best Event Award).

The Congress is attended by academics, entrepreneurs, journalists, activists, artists and students. It is an event that brings together people who think responsibly and is open to participants regardless of age, social, economic or political status. This is an excellent opportunity to listen to extraordinary personalities live and make new contacts.