CONGRESS
"ECONOMY OF A WATER CITY"

In recent years, increasing attention has been given to the importance of nature and greenery in urban spaces. It thus comes as no surprise that more and more cities attempt to not only protect existing green spaces but also create new ones. This is because such spaces guarantee a higher quality of life for the cities’ citizens and cultivate a balanced development for the complicated urban system. Greenery, however, needs an additional element to grow and fulfil its purpose of providing a calming environment or improving the air quality. An element without which life wouldn’t exist. That element is water. Water has been the key factor in the development of civilizations, as well as a resource of both immense worth and limited supply. It has not always been readily available everywhere and should, therefore, be treated with the utmost respect. Compared to the rest of Europe, Poland’s water resources are quite small and require special protection. The main goal of the Congress is to highlight the fact that, in order to grow sustainably, cities need to find a way to balance their plans to create more green spaces with their actions aimed at using water as a vital element of the urban space. The role of rivers (and water in general) in urban life cannot be overstated. It is not only an important aspect of the environment and the economy, but also a space that provides leisure and recreation to the city’s residents. Thus, when building the cities of tomorrow, it is more effective and beneficial to think of the urban space as a green and blue one, as water has a more significant influence than green spaces when it comes to creating a citizen-friendly metropolis.

The Congress will be based around the relationship between the aquatic and the urban environments. We will debate on possible solutions to minimize or completely reduce the negative effects both environments have on each other. Significant attention will be given to the diversity of the water management sector, especially the water supply, production and distribution systems. Both environmental threats to aquatic resources as well as dangers relating to water’s destructive force will be addressed. We will debate on a multitude of topics such as opportunities for the development of water transport, the issue of climate change, or the possibilities of using water and aquatic areas in increasing the quality of urban life.

Anyone interested in the above topics is cordially invited to take part in the Congress. 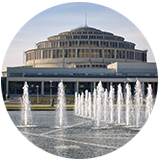